The Odd Job Of Being Pop Rocks Man

The ugly truth of being an actor is that you spend more time working on jobs that have nothing to with acting than you do on the stage or set. Sure, there are the rare exceptions (looking at you, Pia Zadora).

In fact, here’s a little breakdown of the Hollywood caste system I pulled from my butt:

SUPER & MEGA STAR ACTORS
There’s less than 100 alive and they don’t need survival jobs. They spawn their own industries!

FILM or TV STARS
Okay, now we’re talking about maybe 500. Of course, at any given time, 90% are looking for work. But, if they invested/saved wisely, they don’t need a survival job.

MIDDLE CLASS ACTORS
You may or may not know who they are. Character actors who show up again and again. There’s probably up to 2000 alive. Maybe 20% of them survive strictly on their film and TV gigs. 60% rely on commercials and/or voiceover. Another 20% have businesses or part time jobs that have nothing to do with acting.

WORKING ACTORS
There are probably about 30,000 of them. Maybe 35% of them live just under their annual income and, with commercials/voice over, don’t need other non-acting related work.

ACTORS
There are probably 165,000 (union) actors who have to work some non-acting related job to get by.

*Statistics based on excellent guessing ability of my anus.

Most of us move up and down through this system, with a small portion holding firm in an upper caste. I’ve only traversed the bottom three, and only momentarily was I a Middle Class Actor. I’m just a working actor who is lucky enough to make all my money from film, TV and – most dependably – voice over.

So, why write a post about this depressing subject? Because I’m Debbie Downer. No, because someone on twitter asked me if I liked Pop Rocks! (Sorry, can’t find that tweet now).

This got me thinking about all my early survival jobs. I had the usual ones:

A waiter at Cafe LA on the Sunset strip.
The owner was a creepy old guy (similar to what I’ve become) and would give this cute waitress unwanted shoulder rubs. One slow day she and I were standing around and she asked for a quick back rub. The owner came by and gave me a lecture about how there are many ways to steal from a company, like stealing time with a back rub. I looked at him and said, “I don’t need this shit,” took off my apron and walked out. Felt exhilarating! (A few years later he burned down his restaurant for insurance money and got caught… Many ways to steal, indeed.)

A phone canvasser for The Sierra Club.
I only remembered this job because one day after working a 4 hour shift I got in my car and heard the Challenger explosion coverage. Sat in my car for an hour. Sad day.

A bookkeeper for my acting school.
Actually enjoyed chasing down 3 cent anomalies.

A host at Denny’s (for 2 days).
Rock’n’Roll Denny’s on Sunset Blvd. It was the grossest place in LA. And being a host garners as much respect as a meter maid. The manager said it was a tough job, but very important. I called in on day 3 and quit. The manager laughed, saying I wasn’t man enough for the job.

A counter clerk at Bagel Nosh in Beverly Hills.
Spent most of the year with a short ponytail, serving execs and producers from the United Artists building next door. They were not nice people. Made fun of my ponytail.

Then there were the semi-interesting ones:

Phone salesman for Strip-A-Grams.
Utilizing my low voice to excite women and gay men to hire one of our strippers to deliver telegrams. $250 a week full time. Lasted a year there.

Office manager for Maids-of-Honor.
Hired to help this home business couple transfer their records onto this new computer – a thing called a Mac Plus! That’s when I fell in love with Mac! Id stay after my shift for hours working on it for free. The high-strung husband fired me for not being sensitive to his “alone time” needs.

Eric Cotsen’s Personal Assistant.
Of course, the best non-acting job I ever had has to do with the strangest boss Ive ever had. but I already wrote about him here.

Then there were the few times I’d get a temporary gig that directly used my acting skills.

The Simpsons guide..
Most memorable was representing “The Simpsons” at a toy fair in San Diego. It was a grueling gig in that I had an 8 minute spiel to do as I moved groups of people through the toy line, only to reset and immediately begin again with the next group… for 8 hours! 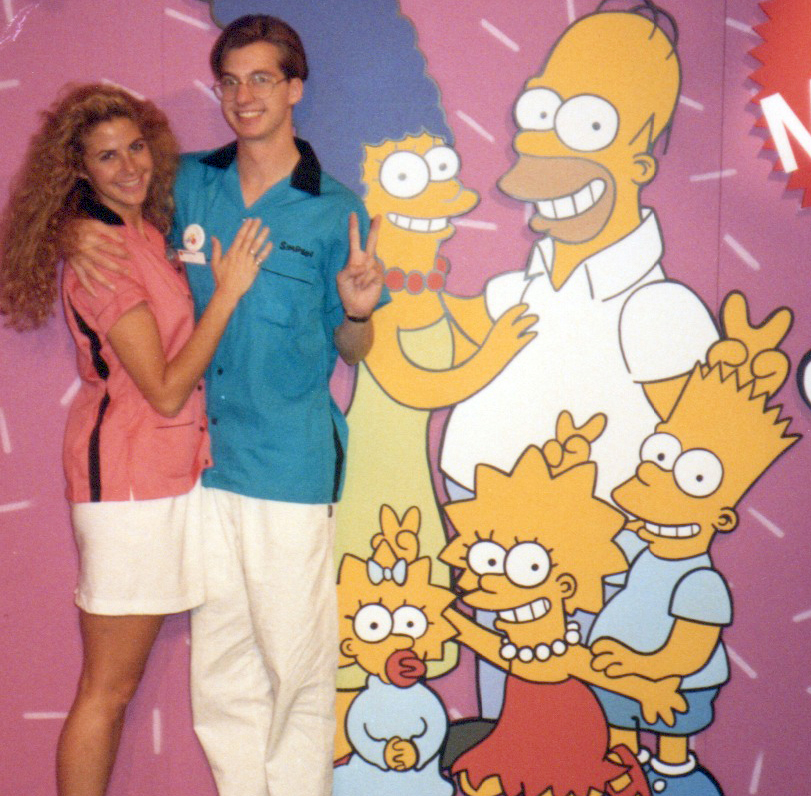 What made that gig fun was working with Brittany. I have no idea what her last name is, but she was very fun – and she taught me how to rollerblade… Sort of. It was one of those fast friendships of my early twenties that just slipped away in the chaos of “finding myself.” If she reads this, “HI, Brittany!”

But my most memorable gig that used my acting skills was being a representative of Pop Rocks during its first comeback since the 1970s!

I was studying voiceover with the great Barbara Gill in 1986 when she had received a call from some company that wanted to cast a mascot character for Pop Rocks – Pop Rocks Man! She immediately thought of me. And what a gig! $25 an hour – in 1986!

Of course, it was just for weekends for a few months, but it was a windfall for me. In fact, I was so “flush” that I took two weeks off my other job at Bagel Nosh and spent my days tanning and going to an electrical muscle stimulation salon! (Put pads on my muscles and worked my body out for me. I’m not proud.)

As for the gig, I was dressed as a mutated Elvis-cum-Nicolas Cage and rode around in a 1957 Pink Cadillac. My driver was a sweet lady who worked for the Cadillac rental place. (Cant remember her name). Every weekend we were dispatched to various parades or carnivals in Southern California and I would give out free Pop Rocks, frisbees and essentially act like a goof. Pretty sure I went above and beyond what they needed!

My favorite memory about being Pop Rocks Man was when we were told they were sending us to Las Vegas for the national candy convention… Except they didn’t get approval for us to be there! In addition, we were being sent on the very weekend I was turning 21! 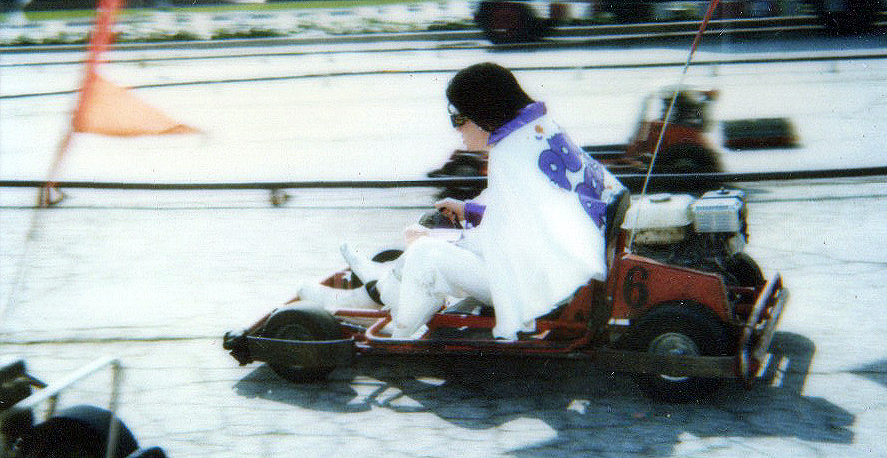 So, there we are in Vegas. Staying at New York New York, I think. $60 per diem. Drinking and gambling everywhere. And a candy convention that kicked us out the first hour of the first day! Sure, the company found a beauty contest for babies to send us to, but, for the most part, we were free to be in Vegas, baby!

Couldn’t have asked for a better 21st birthday party.

So, to answer your question, twitter follower who I can’t find in my stream, “Yes. I like Pop Rocks very much!” 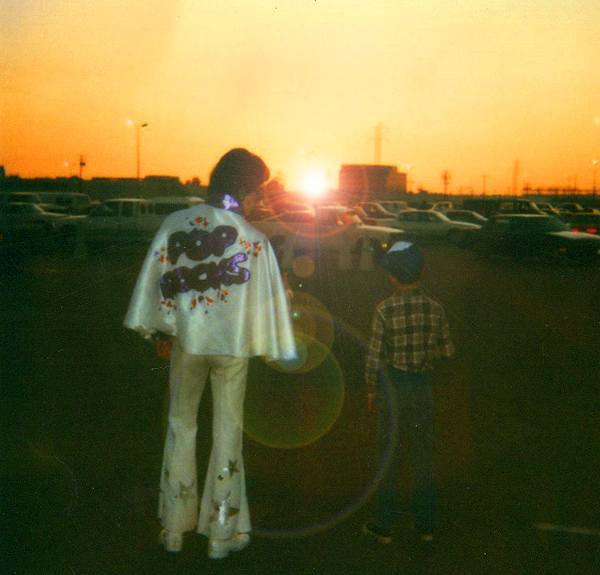