Announcing Stars On The Oceana

Being an announcer at a live awards show in Los Angeles is not really high on my list of desirable gigs.  It’s not because my ego has gotten out of hand (I hope).  It’s just that you’re not always seen as a voiceover artist (slash Film & TV actor) at these events.  You’re on the crew.  You’re “working” the show.

So, I pass on those types of gigs usually.  But my agent had a special one that I just couldn’t pass up.  Not because of the myriad of stars that would be there (I’ll admit it, I peed my pants when I met Vincent Price at a post office in 1986), but because of the event’s purpose – a fundraiser for Oceana. 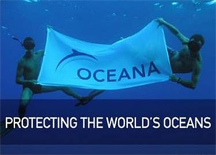 Oceana is the largest international organization focused solely on ocean conservation. Their offices in North America, South America and Europe work together on a limited number of strategic, directed campaigns to achieve measurable outcomes that will help return our oceans to former levels of abundance. They believe in the importance of science in identifying problems and solutions. Their scientists work closely with their teams of economists, lawyers and advocates to achieve tangible results for the oceans… Yes, very cool.  I could go on, but this blog is “behind-the-scenes” themed, so check out their website to learn more about their work.  Read on for an “announcer’s” POV.

Last night, Oceana honored Arianna Huffington and Deepak Chopra as 2009 Oceana Partners.  Film and television producer Keith Addis, who is also the Oceana Board Chair, held the gala at his gorgeous home in the Los Feliz hills – an “Old Hollywood” Spanish style estate with a slice of Griffith Park as it’s backyard.  The event was a full-on LA affair, complete with exotic hors d’ oeuvres, a press gauntlet and tennis court converted into an awards hall.

Initially, I was just going to record from my home studio and they would use a CD at the event.  But then they (Greg Carr and his team at Industry Entertainment) thought it would be best to have me there in case of last minute changes.  I arrived early to go over the set-up and announcements.  I met Keith Addis, who was quite nice and gracious (and a major philanthropist who is highly regarded by the industry).  Then I had two hours to kill.

Now, I’m not a very outgoing guy at a party of strangers to begin with (I need a few friends and several sweet martinis to get “party D.C.” going) and my career (as of now) doesn’t put me in the company of 150 celebrities and millionaires very often.  So, I rejected the most frequently used options for people like me at events like these (be a sycophant-poseur or a career-whore who glad-hands through the party for job connections) and, instead,  just turned into a walking surveillance camera.

I wandered over to the silent auction table to check out the items.  A weekend retreat with Deepak Chopra.  Robbie Robertson’s signed guitar!   There was a single huge gem valued at $20,000!  Backing up this appraisal was the guy in the black suit guarding it.  He stood there all night just watching that stone and looking like he needed a stiff drink.

I was having a good time taking in random amusing moments; Gary Shandling half-flirting with the staff, a shy and diminutive Angela Kinsley (The Office) meeting a charming and towering Ted Danson… Then a guy came out of the crowd and introduced himself to me.   Damn!  Now I was IN the party!

He turned out to be a very nice and fearless man named Keith Kegley who is Vice President of Alliances for the X-Prize Foundation (a very cool concept).  He was there because their next potential contest may be finding an innovation to clean up the massive plastic/trash flotillas in the oceans… Just remarkable.  Fifteen minutes of informative and fun conversation, then he was off to talk with someone who had money and I was off to the tennis court “tent” to make money.

My job was simple; just make six announcements introducing various celebrities.  The show director would cue me to warm up the mic (no, I didn’t have to hug and rub it – it was a wireless that needed 2 to 3 seconds to “connect”) then he would cue me to announce.   The first introduction was supposed to be for Ted Danson.  Apparently no one told Ted that he was going to be introduced.  So, after several attempts by  Keith Addis to get a tipsy Hollywood crowd to sit down, Ted got pro-active and jumped up on stage.  Keith kicked into producer mode and ran back to the tech area where we were situated (behind a black curtain, mind you, with no view of the stage).  A rightly upset  Mr. Addis exclaimed, “Are we not doing the introduction?”

This is where time melted into molasses.  He was looking right at me.  I had no idea Ted Danson was on stage as I couldn’t see the stage.  In my confusion, I did what anybody in the dark does, I shrugged and gestured to the director next to me.  A perfectly executed show biz “pass the buck” move.  It was impressive.  But then my heart dropped into my upper intestines.  Did I just ruin my chances of ever being in a Keith Addis produced film or television show for the rest of my life?  My insecurities perked up and supported this notion whole-heartedly.  “Yup, you’re screwed.  They should’ve stayed with the CD idea.”

Keith gestured for Ted Danson to wait one moment.  He came back and said, “Well?!”  At that point, I turned on the mic as the director frantically gave me the cue… And the three seconds the mic took to warm-up was all that was needed to drain the blood from my head.  I announced Ted Danson as the audience laughed.  I lilted my voice a bit to acknowledge that “Yes, Ted Danson is on stage talking, but this introduction is so compelling you just have to hear it!”

The rest of the show went smoothly… As it should since a show announcer is supposed to be the easiest job at a live event… Next to being the guy who watches a stone.

Some highlights include hearing Lawrence Bender (producer) talk about being a waiter at Arianna Huffington‘s party years ago, Deepak Chopra reading a poem while Dave Stewart (Eurythmics) and his beautiful violinist performed, and January Jones (Mad Men) auctioning off an Australian shark diving expedition. (I wanted to tell her to give Don Draper a third chance, but that would’ve been creepy.)

After the event, as folks were leaving, I saw Deepak Chopra shaking hands and taking pictures with audience members. I readied my camera because I knew my mother would be tickled if I got a picture with him. Then I saw a look on his face as he was going from photo to photo that seemed to say, “Dear God, where’s the car?”  Then it hit me – vying for a picture with a spiritual figure is a bit antithetical to transcending the ego…  I put the camera and my ego away.

And check out the concept of incentivized prize driven innovation of the X Prize Foundation at: X PRIZE Foundation