In everyone’s life there are a few people that are always lingering in the rafters of the mind.  People who inspired us, helped us discover our potential, or were hands-on mentors.  For me, there are three of them.

“Spiegie” whispered to my Mother during my freshman year Drama Awards ceremony that I wouldn’t win the Best Actor award (it went to a senior – freakin’ politics!), but told her I was quite talented and should continue with it.   (20 years later, “Spiegie” appeared in my film short “Freud And Darwin Sitting In A Tree” as my father – he asks me if I’m gay in the trailer below). 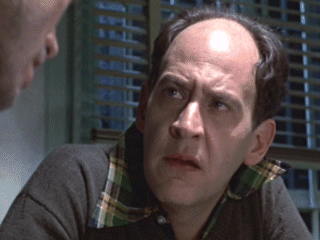 Second, Earl Boen, a well known character actor and voiceover artist who directed me in a murder mystery dinner show he and his late wife produced back in 1986.  He was the first successful actor I knew who said I had a real chance of having a career. (Earl is best known for his role in the Terminator trilogy). I was playing a murderer in drag (named Chris Cross) who hit on all the old men in the audience.  Perhaps he meant I could have a career as a transvestite… Hard to say.

Lately, though, I have been thinking about the third person who has had the biggest impact on my life and who has no idea.  Barbara Gill.

In 1984, with my hair mullet in place, I went to the local library in Concord, California and looked up “drama schools” in Los Angeles.  Remember libraries?  Like the internet, but without the spam or naked people… Well, without modern naked people.  Anyway, I made my list of seven schools/coaches I would audition for, then set-off to Los Angeles for a visit.

Over a period of four days I auditioned for the Lee Strasberg Institute (the uninspired “auditor” showed me a video of people crawling on the floor like animals and told me the tuition was due in full, up front), Bernie “somebody” (had a stage built in his living room and a business card that said “Star Maker”), Estelle Harman Actors Workshop (which had financial aid, a comprehensible program, and a sexy “auditor” – Jeannette Balsis), and several others.  I chose Estelle Harman.

But while on this journey, I had stumbled upon Barbara Gill.  A sweet woman who was in her 50’s or 60’s with blond hair worn like it was on her business card – a classy late 1960’s style.  She had an office in her mother’s dance studio on Florence near Crenshaw in Watts.  I assumed she wanted to see my audition monologue so I went right into it (an overly wrought gut-wrencher from the anti-war play, “Johnny Johnson”).  She was pleased I wanted to show her, but was a bit confused.  Turned out she was a voiceover coach.

The serendipitous part was that she loved my voice.  Said I had the instrument for voiceover.  She also told me that what I’d learn with her would transfer to the acting.  I had no idea what the hell voiceover was, but I had six months before I was to start the acting program at EHAW (Estelle Harman’s) and Barbara only charged $30 for an hour session once a week.  I stayed with her for about a year and a half.  In that time, she opened me up to the possibility of a second career as a voiceover actor.  She also helped me tap into my word-color instincts.  This helped me key into scripts at school a lot quicker than most of the other students.

Barbara had a well established voiceover career herself and was with William Morris back when that was a major achievement (no offense to the merged behemoth and it’s clients now, it was just different then).  We stayed in touch for awhile, but then I got lost in my twenty-something navel.

I’m writing this post in the hope that someone out there will know where she is these days.  I’d love to phone her up and just thank her for the life that she helped me create.

… And also for referring me to Pop Rocks! (They hired me to be a mutant Elvis in a pink Cadillac at parades in Southern California at $25 an hour in the summer of ’86.)

All three of these artists kept me on the acting path.  If the path had led to an Oscar™, they would’ve been on the list in my pocket.  But the path just led to a very happy life.  Not sure there’s an awards ceremony for that.  And if there was, I would probably avoid it – too many warm, fuzzy people giving long bear hugs and exchanging tips for meditating to Yani! 😉

“Yani is like receiving an Oscar inside your heart chakra!”