This post is a little off my usual unpaved, beaten path.  It’s a specific Google shout-out to all the folks who have ever studied or taught at the Estelle Harman Actor’s Workshop in Los Angeles, California.

Because EHAW was an acting trade school, there was no alumni association.  Thousands of actors passed through those doors over the decades.  Now, over fifteen years after the school closed, Alex Purnell (a designer and game show contestant pro!) has started an alumni page on Facebook.  This is my way of getting the word out to cyberspace so other fellow alum can reconnect.  But first, for those who don’t know;

Estelle Harman was an esteemed acting coach in Los Angeles. She began as an acting instructor at UCLA in the 1950s, then was hired by Universal Studios as Head of Talent to groom their stable of film actors, which included Rock Hudson, Bill Bixby, Tony Curtis and Audie Murphy.

As the contract years ended in Hollywood, she started her own school — the Estelle Harman Actors Workshop. It operated two theatres, an on-camera class and offered a curriculum that met federal requirements for financial aid. The school closed shortly before her death in the mid-1990s. The list of movie actors that studied with her is lengthy, many of whom went on to successful acting careers in hollywood movies and television.

Grounded firmly in Shakespeare, she emphasized the “independent actor” who could pull from all the tools the different acting philosophies offered (Sanford Meisner, Stanislavsky, etc.) without having to be dogmatic about any of them.

The summing up of decades seems woefully inadequate.  But it’s a blog and I’m an actor so I should spend most of my space here being self-indulgent. Oh, please let me oblige!

First, keep in mind that this school was not like most acting classes you hear about in L.A.  It was a federally accredited acting school.  They had classes being conducted every day for all aspects of the business.  They had financial aid, office/reception area, a break lounge, rehearsal rooms (where many a “scene kiss” went much longer than required) and two theatres.

The scene study classes were tiered.  There was a beginning, intermediate, advanced, and professional level.

I was 19 with with a desire to act that was twice as strong as my actual ability to act.  So, I started in the Beginning class with Suzi Harris as my instructor.  As a teacher, she was painfully insightful, caring and sensitive (so sensitive, she taught a “sensitivity” class that worked wonders for me).  The upside of my genetics is that I’m a quick learner and advanced to the intermediate class the second term.  That’s when I met Estelle. 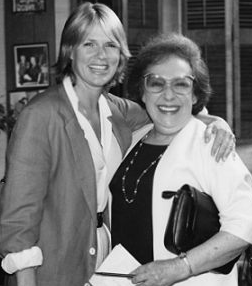 Estelle Harman.  Classy.  Tough.  Wise.  A diminutive woman with a huge presence and smoking habit.  Her voice was low and textured, but so well trained that she could turn a phrase without changing pitch.  She sat back row center, the Queen in control of her kingdom.  She was a benevolent ruler who commanded respect.

On the first day of class I wanted to make an impression, so I brought in a monologue (no one was required to perform anything on the first class).  I performed the climactic monologue from the 1930’s “Johnny Johnson” with fervor, passion, and angst – oh, the angst!  The first critique I ever received from her (in that trademark low, resonant voice) was, “It was technically good,  like a college performance.  But I’m afraid you have no inner life, dear.”  She was right.

I remember another time when she was critiquing my scene partner and was trying to convey the concept of thought process,  she said, “See, dear, even when D.C. makes wrong choices, he’s still interesting.”  I think that was my favorite criticism/compliment!

Over the five years I studied there (the last few in the Professional level), I always received precise, insightful direction from her.  She was supportive, when needed, and tough, when needed.  She made me into the actor I am today.

There were other teachers, as well.  Her husband, Samuel “Doc” Harman (Psychology For The Actor), Suzi Harris (who also taught Cold Reading Technique), Ira Marks and Zach Hoffman (Improvisation), Eden Harman (who I believe taught almost ALL of the classes!), Ari Barak (Camera Technique, Scene Study and many more) and other teachers through the years that I never met.  I even ended up working in the office as the bookkeeper (taking over for Jim Brandt) and assisting Ari with the Camera Technique class.

[An excerpt from a scene study class at the Estelle Harman’s Actor’s Workshop circa 1989.  With D.C. Douglas, Rob Consoli and Jack Hamblin] (adult language)

I used to joke that I doomed my career because I didn’t go to a college and forge life-long friendships with the type of kids that would become producers and directors (people who could actually get me a job), but instead, I spent my youth at an acting trade school, networking with other actors!

But it was a joke.  I’m halfway through my life and, aside from my family, the teachers and alumni of the Estelle Harman Actor’s Workshop have been the one constant in my life  for over 20 years.  My EHAW family.

If you are reading this and were a part of this world from 1957 to 1993 (lovingly referred to as Harmanites), come over to the Alumni Page on Facebook and share your memories, pictures, and video.  Your EHAW family awaits.

For the rest of you, we will return to my regularly scheduled blog next post.

[Fun trivia note:  The picture at the top is of the talent stable at Universal in 1951.  If you squint, you can see Estelle sitting on Rock Hudson’s lap… And I think Waldo might be in there, too.]