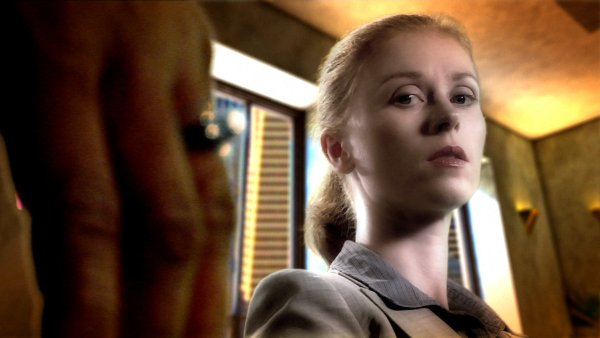 Well, after my last blog bemoaning the way my film short, “The Crooked Eye,” had been programmed at the LA ShortsFest (a sci-fi block!) I got a google alert that it was shown to an appreciative crowd in Palm Springs — or rather, at least one appreciative person who has access to a blog!

Sharon has feelings of inadequacy. She feels everything that is said to her has an alternate meaning that is being passed to her via code, like the turning of a door knob, etc.  She isn’t psychotic, she’s depressed.

Her husband, Frank, (played by director D.C. Douglas,) has left her because of her strange behavior.

Rosemary, (played by Katherine Boecher, of The Booth Brother’s “Dark Place“,) her “friend” from work gets Sharon to go out for a drink. Rosemary’s new boyfriend, Roy (Joe Duer,) is a bartender.

Sharon is overwhelmed by so many feelings, and all of them bad.

I have never seen a film that comes so close to how anxiety and depression really feel. Sharon’s feelings made me uncomfortable, as they were suppose to. Sharon was sinking so deep into a black hole she might never have gotten out. We don’t know. As this is a short, it ended….

We are left to wonder about her fate. Wondering about her fate is almost worse than knowing what happened to her after the film ended.

I would like to know what experience the writer of the short story the adaptation was based on, Betty Malicoat, has with depression. I think it must be up-close and personal.

This film, which only runs 15 minutes is ‘Hitchcock-like”. It has the dark film noir type of feel. The Paranoia, the thoughts that Sharon has. There is a narrative running through the film, so we know exactly what she is thinking. At the end, I actually expected her to be attacked by aberrant birds.

A great short. I would say that I would like to see more, but I couldn’t handle more. I don’t think Sharon was long for this world.

Wow. I love it when someone gets it.  Though the last few seconds of the film does hold an answer to her question (and it doesn’t involve birdies).

We received another glowing review from The Independent Critic who saw it at the HollyShorts Festival here in Los Angeles.

Based upon a 1995 short story by Betty Malicoat, “The Crooked Eye” is a beautifully constructed 18-minute surreal short film that follows Sharon (Fay Masterson) through her daily drudgery of living in a world where she is not as she seems and her psyche’ is flooded by memories of a recently unraveled marriage.

A dreamy whisper of a film, “The Crooked Eye” features original music from Abraham Peraza and Lilia Popova that exudes an almost mystical blend of spiritual isolation and a loss of hope while remaining strangely and peacefully meditative.

“The Crooked Eye” includes an eerie yet comfortable narration from actress Linda Hunt (“The Year of Living Dangerously”) essentially serving as the inner voice of Sharon. It’s a gimmick that could fall woefully short, yet Hunt pulls it off perfectly and fans of Malicoat’s story should be quite pleased.

“The Crooked Eye” is most likely to connect with fans of Malicoat and those able to connect with its underlying spirituality, while others may simply think “Did David Lynch direct this?” and move on. Having already screened at nearly 20 film festivals in 2009, “The Crooked Eye” is an intriguing and thought-provoking short film from D.C. Douglas and should have a long tour of the film festival circuit.

A very nice review, too, but it does seem to imply he falls into the “Did David Lynch direct this?” category (Compared to Hitchcock and Lynch in a two day period? – I’ll take that!).  Regardless, Abraham Peraza and Lily Popova did do an amazing job scoring the film. (And all my actors rocked the Casbah!)

You can learn more about “The Crooked Eye” by visiting www.TheCrookedEye.com.