Does This Virtual Character Make My Ass Look Fat?

I can now say that this was for NBA2k14 and I play the big time Über Agent you meet once you’re good enough!

Last week I became a 21st century actor.  I was hired for my first all mocap acting role!

For those who don’t know, mocap is short for motion capture.  Essentially, I put on a suit that has little ball reflectors attached at strategic anatomical locations. These balls are constantly monitored by lasers that surround the entire sound stage, floor to ceiling. (Lasers pointed at my balls like a cheesy James Bond scene!)

Then I put on a helmet that has an intrusive light and camera mounted on it (“Brainstorm“).  The camera records my face and the painted dots that have been placed at all the muscle points that create my emotional cues (and fricken wrinkles).

And since the audition was through my voiceover agent, there’s also a microphone to capture my, you know, voice.

Now, I consider this 21st century acting since there is an industry movement towards this kind of filming for all videogames and some fx heavy films.  I sense that, with the inevitable advent of true 3d/virtual reality entertainment, this will be the way a 21st century actor will perform.  And, as an insecure actor, I’ll always desperately embrace any new performing platform (I hated being picked last for dodge ball).

But this wasn’t my first tango with laser balls.  I had actually auditioned for a full mocap role back in 2008 for “Resident Evil 5.”  Unfortunately, I had thrown my back out a week before by lifting a bag of cement while supervising my house renovations (I wanted to pretend I was doing some of the work like a “real man”).  I had told Reuben Langdon about it and he said to come on in anyway as they weren’t going to need any stunt work.

My audition consisted of them showing me stunts and me telling them “I can’t do that” over and over.

Not surprisingly, I didn’t get it (Ken Lally did), but I was still a lock for the voice and the facial mocap of Albert Wesker.

This game, though, is a completely different genre, but a familiar character archetype.  According to their lawyers, I can release the following information: It’s a videogame.

So, after getting the call that I booked it, I received the script.  33 pages of dialogue for a two day shoot in San Francisco!

See, as a film and TV actor, I rarely get more than a few pages (“Apocalypse Kiss” notwithstanding).  And it takes much longer to shoot each scene in the traditional film/tv setting.  Actors tend to familiarize themselves with the scenes the night before but truly learn them during the hour it takes the crew to set-up and light a scene.

But with mocap, there is no set-up!  It’s all virtual.  The studio is already lit and there are no cameras, per se, just computer-monitored lasers every few feet horizontally and vertically – all set and ready!  So, the fear of learning a one-man play in a few days freaked me out! 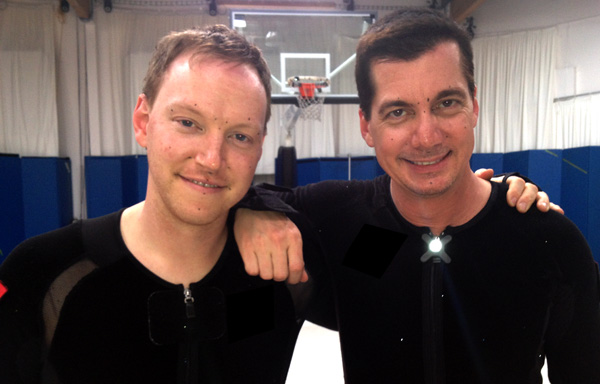 I’m actually grateful I was freaked out by all the dialogue as it took my mind off the fact that the skin-tight mocap suit made me look like a eunuch.  I looked fit, yes, but sexless.

As for the memorizing, luckily, they had to alternate between my scenes and another actors scenes – giving me much needed rehearsal time.  Though there was one 6 page section that was packed with alternate versions of monologues. They were so similar in verbiage that I had to have a producer give me the lines in an earpiece a la a burnt-out Marlon Brando.

The [redacted company] flew me up to my beloved San Francisco for the two days. I was born in Berkeley and grew up all around the Bay Area, so I had a blast eating Italian carbs all three nights before hunkering down in the hotel room learning lines.  I just LOVE that city for the food, the people and the romance of  geography. 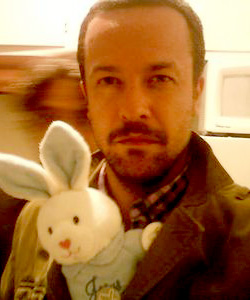 [Redacted title of game] was directed by Chris Papiemiak.  I couldn’t have been luckier getting him as my first mocap director!  Funny, insightful, easy-going and creative.  An actors’ director.

My co-star was a great guy out of Washington DC, Mark Middleton.  A voiceover actor, musician and kind soul.

The great Bay Area vibe extended to the whole crew and creative team.  Having lost my mocap virginity to them, I can’t help hoping they’ll have me back for another game.  They taught me so much.  Opened up a world to me.  I trust them.  Their gentle touch… The way they kissed my neck… Sorry, I get sentimental.

I’d love to tell you more details, but I kinda got in trouble for doing that already! If you have been following me on FaceBook or Twitter, I actually DID reveal the title!  But, apparently, I was misinformed about what I could say and had to delete those posts and tweets…

Just be patient… 2014 is right around the corner and you will know all!  If I can handle lasers on my balls, you can handle 7 months of waiting. 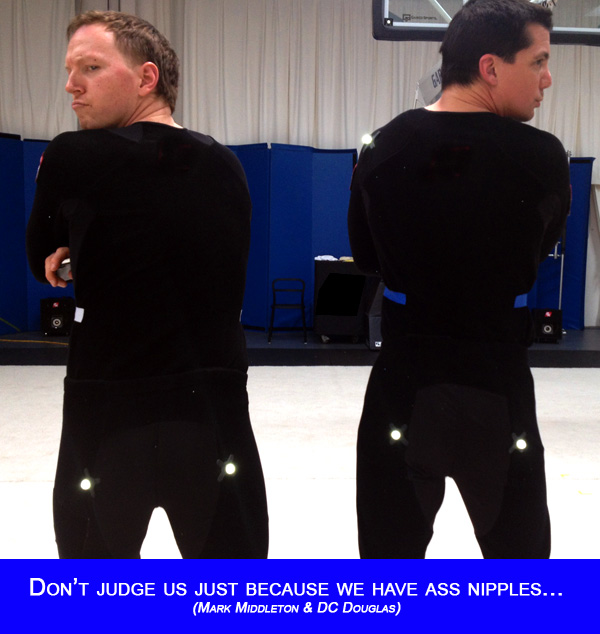